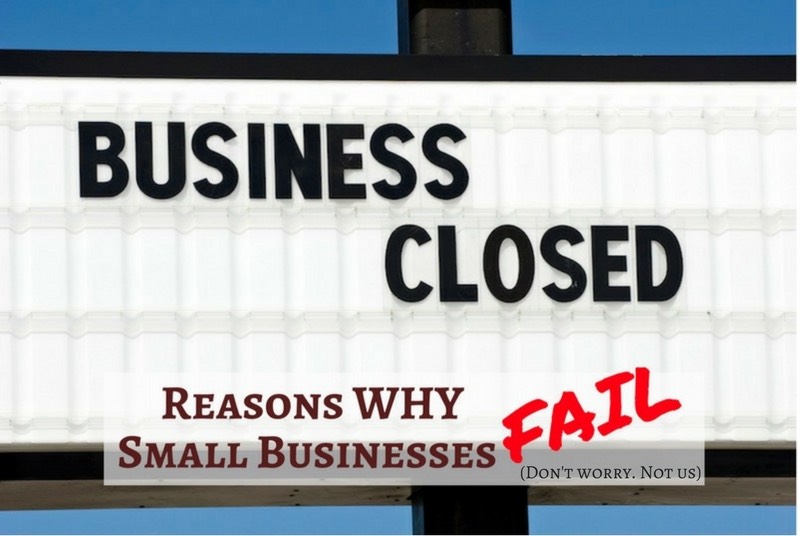 We’ve all heard the old adage: At least 85% and maybe as high as 98% of new small businesses fail before they hit the five year mark.

That rate may have been even higher over the past decade.

Now, even with various items of recent good news in the economy, we all must still plug the holes in our own houses.

And this economy is certainly revealing some “holes” in some of my friends’ and clients’ businesses, here in the Inland Empire area and beyond. Others are doing well, thriving even … but I want to say that discovering business problems can be a healthy process, however painful — and certainly always worth it.

So I thought I would take this week’s Note to highlight some reasons why small businesses fail I’ve seen as I go more deeply into the books and strategies for some of my Inland Empire clients’ and friends’ businesses.

The Most Likely Reasons Why Small Businesses Fail In Inland Empire
“If a man has any greatness in him, it comes to light, not in one flamboyant hour, but in the ledger of his daily work.” -Beryl Markham

If your Inland Empire business is still going after a few years, you’re in select company. That’s the good news.

The bad news might be that you could be headed for oblivion, and not just because the AI robots are coming. (Though the robots ARE coming!)

But when a Inland Empire small business does end up failing, often the “conventional wisdom”, especially among many other accountants or service professionals in the financial arena, will tell you that the reason for that failure is “undercapitalization” and “poor fiscal management”.

But see, I can point you to businesses that have failed with enough money to do everything they needed to do ten times over. And yet still, some management consultant will tell you it’s “poor management ability”.

I suggest to you that what it is in most cases is that once the business owner was in business they were done thinking they needed to sell.

I think you see how dangerous that thinking is. It may not be “classic” cold-calling or prospecting … but can you really believe that the patient consultations with doctors aren’t also a form of sales process?

You obviously have some method you use to promote your business or you wouldn’t even be in existence. But you probably only have one method or two methods or three methods that you use consistently. So a good way to add a boost to your bottom line is to increase the number of methods you use.

The more methods, the more business. As marketing legend Dan Kennedy said, “Diversity is the creative opposite of laziness.” So you need to think, “How can I use more methods to attract the right kind of people to do business with me — more than any other Inland Empire competitor will use?”

The more methods, the more business.

Hopefully that thinking process has begun to take place for you today. Again, I don’t pretend to be a “guru” … I just see what works, and I pass it on.

Feel very free to forward this article to a Inland Empire business associate or client you know who could benefit from our assistance — or simply send them our way? While these particular articles usually relate to business strategy, as you know, we specialize in tax preparation and planning for Inland Empire families and business owners. And we always make room for referrals from trusted sources like you.